Our Guide to Aftermarket Suspension

Replacing your OEM suspension with an upgraded coilover kit is one of the most rewarding modifications to your car. We’ve put this article together to help you understand some of the terminology so you are better equipped when making a decision to purchase your next aftermarket suspension kit.

A coilover over by definition, is essentially a single flexible unit compromising of a spring over a damper. Hence the term “coil + over”.There are many Competition Suspension Kits available from budget, mid-range to high-end. Each with their pros and cons.We’ve prepared this article to explain some of the terminology used by Suspension Manufacturers to help you make the right decision.

Springs support the weight of the car. If you run a hard spring the flexible link between the car and the wheels becomes very sharp and fierce, the car will feel more responsive when changing direction, but the downside is any undulation in the road surface will be felt by the car’s occupants. This is why a suspension designed for silky smooth race tracks isn’t suitable for use on roads which are inherently rough and uneven.

Softer springs will result in a suspension system that is slower to respond, the wheels will travel further and it will absorb more of the shock of uneven road surfaces. It will be kinder on both tyres and occupants, but at the cost of responsiveness. When you hear car enthusiasts referring to cars handling like a boat, they basically mean the suspension is soft and not responsive.

What are Linear, Progressive and Helper Springs? 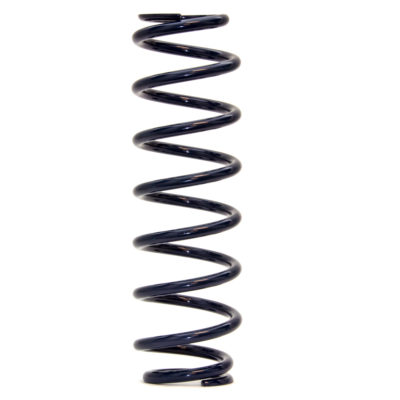 With a linear springs it is easier for suspension manufacturers to build high performance suspension kits, knowing vehicle weight, intended use and spring rates. 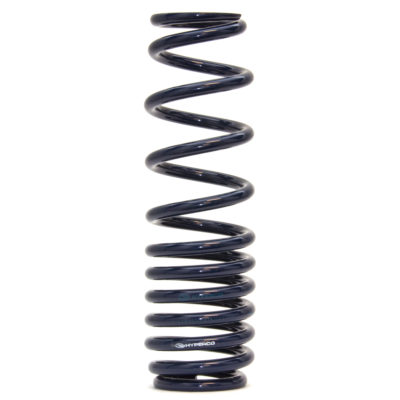 These are also called variable rate springs. They are often found in aftermarket spring only kits, or OEM applications. The purpose of a variable spring rate is to allow the spring to compress and rebound on light surface imperfections.

In the image, the tightly wound area at the bottom is designed to absorb small imperfections on a roads surface. This is typically a softer spring rate.

The more loosely wound part of the spring at the top comes into play when the lower half has fully compressed/collapsed and has a different spring rate.

Progressive spring rates are better suited for road use, whilst linear springs are designed primarily for fast road/track use. Linear springs due to their consistency are easier to match to a damper, providing superior performance. This is why most aftermarket coilover kits come with linear springs.

Some suspension manufactures such as the MeisterR ClubRace, come with two springs separated by a Perch. This is called a Helper spring.

What often confuses people, is when looking at a vehicle when it is stationary with helper springs, they are fully compressed by the weight of the vehicle.

What are Suspension Dampers?

What is rebound and compression?

Rebound – This is what helps suspension restore back to its original position after a bump or road surface irregularity. It is a downward moving stroke, and also stops the spring from over-extending.

What is rebound and compression?

Unless you are lucky enough to live in Japan, most roads are uneven full of potholes, speed humps, etc.

Low speed damping is when dampers compress in a slow manner, for example going slowly over a speed hump.

High Speed damping is when dampers compress in a fast manner, for example hitting a pothole or rock at speed.

The rate at which the damper compresses (compression) and rebounds varies based on the force. The diagram below shows suspension with a linear damping rate, which is different for low speed and high speed damping.

If you imagine the numbers 1,2,3 correspond to different settings on the suspension damper, usually adjusted from the top, with clockwise increasing damping force and turning anti-clockwise reducing damping force.

As you change this, it impacts both the low speed and high speed damping.

[ 1 ] – Less force is required to increase velocity on the damper.

[ 3 ]– More force is required to increase the velocity of the damper.

Compare the two, Option 3, would feel firmer than Option 1.

A cars suspension plays a vital role in how a car performs on the road and track. By lowering a cars ride height, you lower its centre of gravity and roll centre. This greatly improves the cars handling ability.

However some people, and we don’t judge, sometimes take this to the extreme.

To stance or not to stance?

Stanced cars look great in photos, but too much stance or camber will negatively impact your cars drivability and performance. If you are driving around with enough planks of wood in the boot to make a treehouse, then maybe you need to reconsider your suspension height. It’s no fun destroying splitters, exhausts or worse cracking your sump.

We have all seen videos of stance cars get beached on a slightly imperfect road surface. Whilst we understand the need for form over function, there is a point when it’s just bonkers.

I can’t speak for other countries, but I can speak for England. Our government with all of its education and expertise most intelligent way of slowing motorists down is to put mounds of concrete in the middle of the road. These monstrosities are commonly known as Speed Humps.

Just ask anyone who has to drive through Lewisham, driving through that town is like driving through the set of Jurassic Park with speed humps and potholes on just about every road. Everyone hates them, I’m yet to come across a single person who thinks they are a good idea.

Anyone with a lowered car understands the struggle, however, there is a solution. The obvious one is air suspension, but despite what air suspension marketing teams will try to persuade you, coilovers are superior for handling. So what do you do if you want the handling characteristics of a coilover, but do not want to destroy your expensive carbon fibre splitter and exhaust system?

Air cups are typically manufactured from aluminium and sit on top of the spring below the top mount. Add compressed air and the air cups expand raising the suspension of your car. We installed a set on an S15 and it raised the nose by 60mm, this was enough to get over most obstacles such as speed humps, or steep entrances into petrol garages.

We fitted a set of air cups to MeisterR GT1 suspension for an S15, so we know it works on MeisterR suspension. For other suspension makes we recommend talking to the suspension manufacturer. 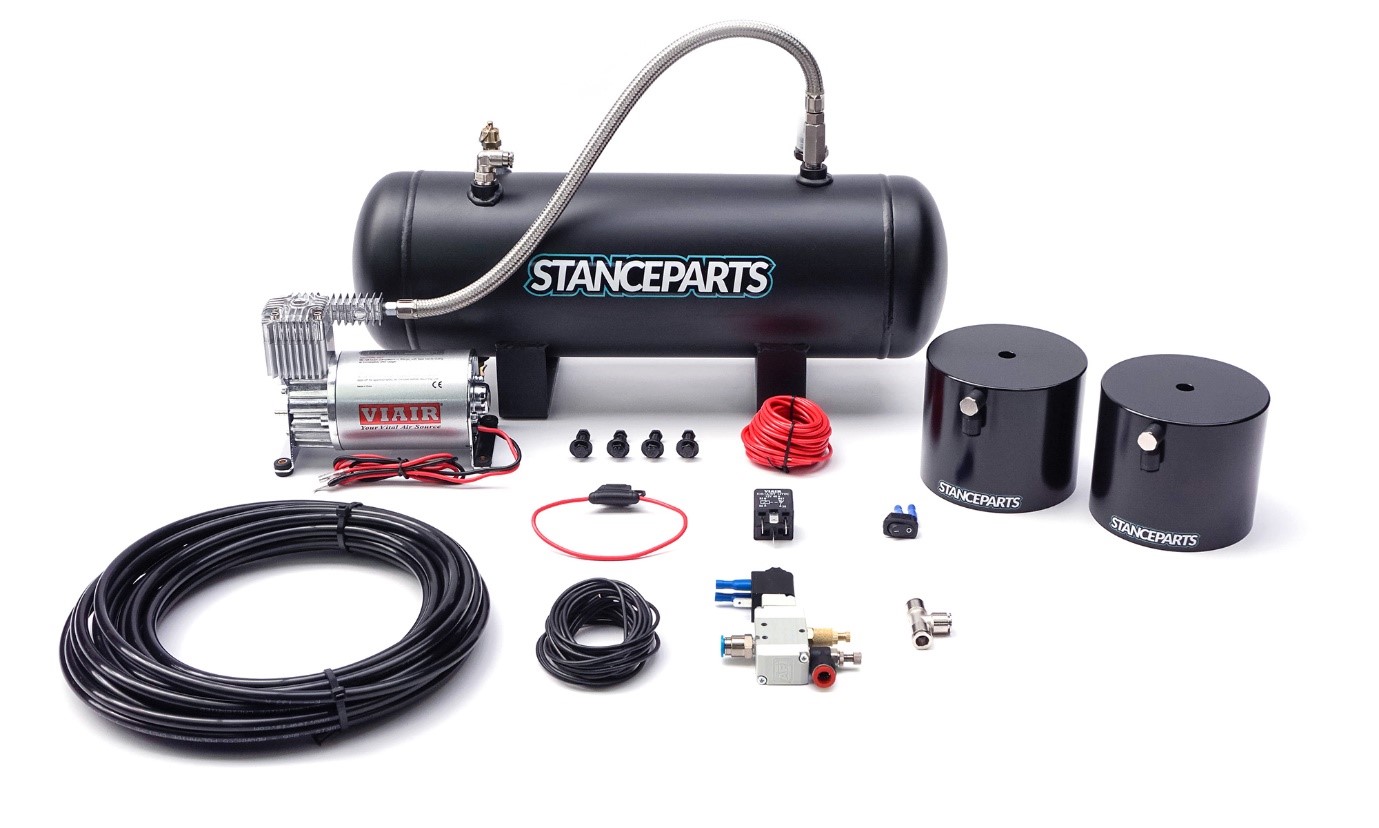 Here are a few tips when it comes to looking after your aftermarket coilovers from personal experience.

On most coilovers the ride height can be adjusted by winding the lower mount in or out to lower or raise the car.

We recommend spraying the damper threads with white grease and wrapping the exposed threads in fabric tape (often used in wiring looms).

This prevents dirt and grime building up in the threads should you wish to adjust the suspension height in the future..

2. Set damping based on surface

There is a common misconception that the harder your suspension setup, the better it will perform on track. This is simply not true.

Suspension needs to be adjusted based on the surface and conditions you are driving on.

For road setups, as a starting point, we recommend adjusting the dampening to full hard (Clockwise), then full soft (anti-clockwise), count the number of clicks (Usually 32).

Go back to full hard (clockwise), and then back by one third of the total number of clicks (e.g. 10 clicks).

After you have installed your coilovers make sure you get your geometry and tracking setup as soon as possible.

Lowering suspension height often impacts toe in/toe out and can cause excessive tyre wear if not setup correctly. 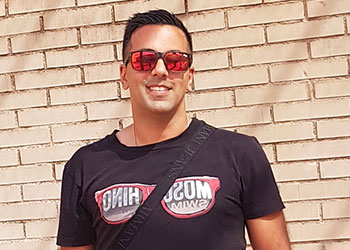 Shah is the founder of Compare.Parts, he has been a car enthusiast since he can walk and enjoys building performance orientated cars. Shah currently owns an 750bhp V10 RS6, 950BHP R33 Skyline GTR and a HKS inspired RB26 powered Altezza.Find me on Instagram  Facebook  Linkedin  Academia 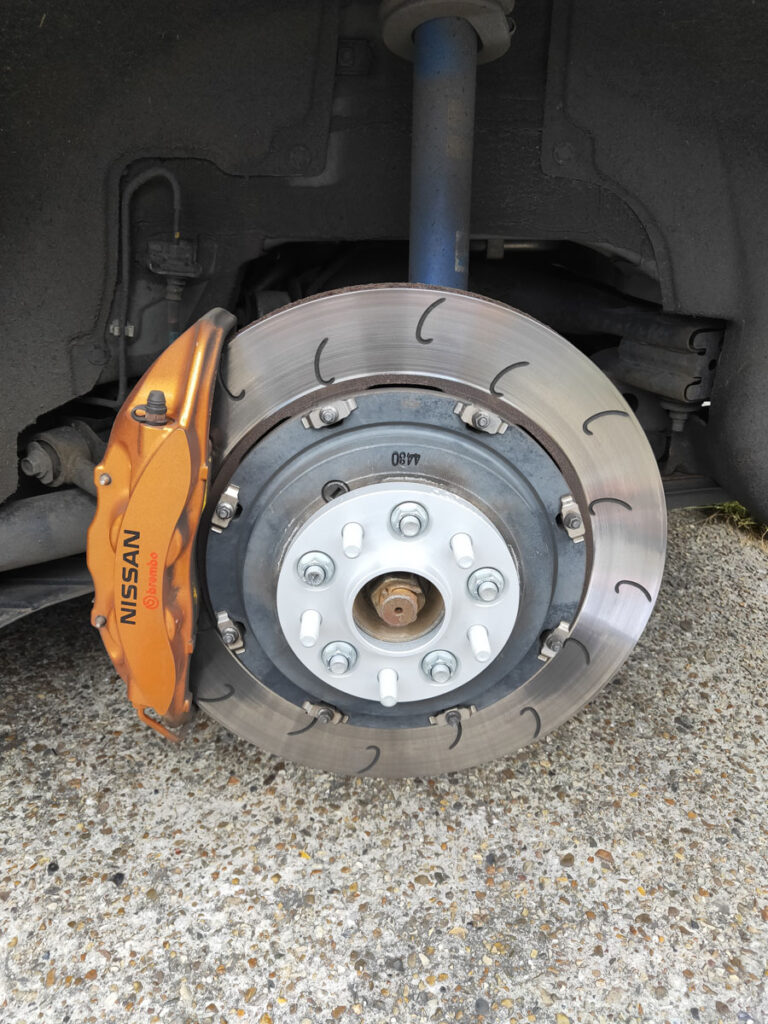 35 things to check before buying a used car

Pre-sale research options, how best to look over the stationary vehicle, how to get the best from the test drive, as well as some useful post-sale information. 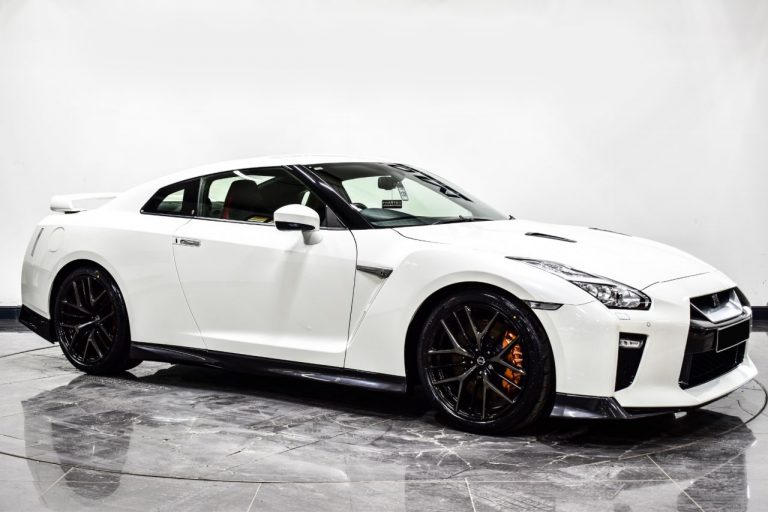 The difference between the Nissan R35 GT-R models​ 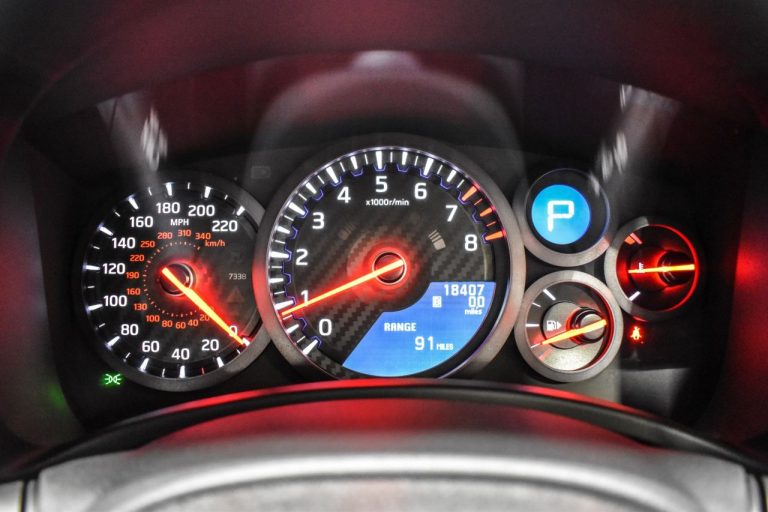 Nissan R35 GT-R Stage upgrades, what do they mean?

Nissan R35 GT-R Stage upgrades – what do they mean? The R35 platform was destined for greatness the day it rolled out of the hermetically 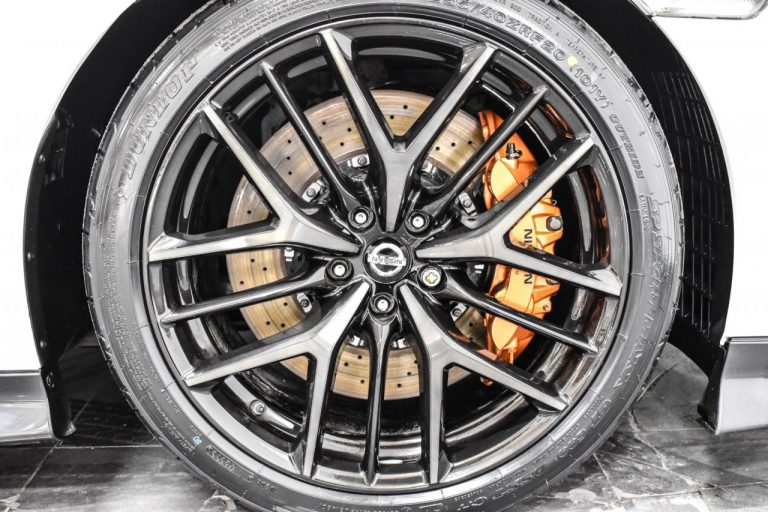 Our Guide to Braking

Our Guide to Vehicle Braking Systems Arguably the mostly overlooked upgrade is braking, as most new performance or hot hatch cars come with decent stoppers 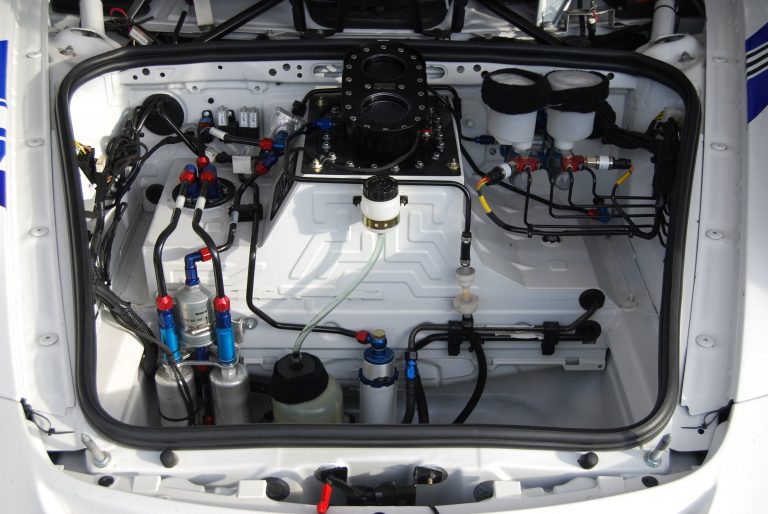 Our Guide to Fuel Systems

No matter if you’re a theoretical mastermind or a wing it on the fly type of person, there are still some key basics that need to be thought about when piecing together your fuel system in order to make it work.

Compare.Parts is the worlds first search and comparison site for aftermarket and performance car parts.

Created by a group of car enthusiasts who understood how difficult it was to find aftermarket parts online and did something about it.

Find out more about us 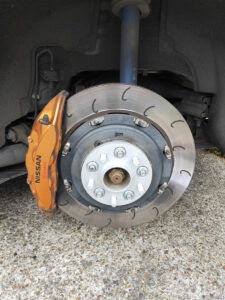 Car Torque is powered by Compare.Parts