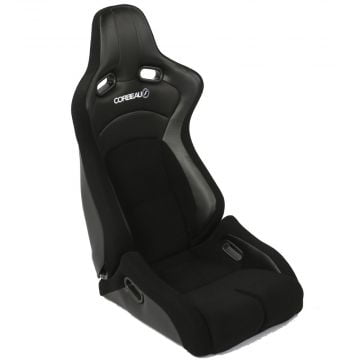 The Corbeau RRB is the closest you can get to a true fixed back seat, whilst retaining a reclining function for long journeys. With the unique seat bolster design offering the maximum lateral support possible in a road seat, the RRB also allows for the use of both 3 and 4 point harnesses as well as standard inertia reel seat belts. The Corbeau RRB seat is

Corbeau Seats Ltd was the first motorsport seat manufacturer in the world. The original Corbeau Equip was launched back in 1963 by original owner Colin Folwell. Colin found that standard road seats in his race car did not offer the support nor protection required by the tremendous speeds being produced by race cars at the time. Therefore; he developed the first ever race car seat here in East Sussex, where Corbeau Seats still proudly produce road and race seats.

Fast forward to the present, Corbeau are still proud to be manufacturing motorsport, classic and road seats to high internal standards, ensuring Corbeau continue to keep drivers and passengers safe. Since its acquisition in 2011 by CMC group, which embraces not only Corbeau Seats but Luke Harnesses, Corbeau Motorsport Engineering and Corbeau Racewear, Corbeau have gone from strength to strength.

Corbeau has some great racing heritage and in 1992 Corbeau became the first British manufacturer to acquire FIA homologation on motorsport seats. Fast forward 25 years and 2016 saw Corbeau launch their biggest achievement to date, the introduction of the new FIA 8862-2009, 10-year homologated, Predator seat.

Over the years Corbeau has not only focused on the motorsport market, but Corbeau also expanded their reach to catering for a wide array of aftermarket seating, from classic cars to highly modified machines and everything in between. Corbeau now supply marine, stadium and office seating.

Founded back in 1975 by John Hansford, Luke Harnesses has a strong reputation to complement its market-leading status. Corbeau purchased LUKE in 2003 and is proud of the heritage that accompanies the brand with prestigious clients such as Caterham, Radical, and Donkervoort

LUKE does not only cater to motorsport client’s but can also offer bespoke harnesses for off-road vehicles, light aircraft and construction vehicles.

Corbeau's main aim is to keep both drivers and passenger safe, but alongside seats and LUKE Harness range, Corbeau also manufacture high-performance stainless steel brake lines, can supply you with the latest FHR systems, Walero Cooling underwear and Corbeau are official distributors for Safe Solvents parts cleaner, one of the best parts cleaners on the market today.

Corbeau pride themselves on using the highest quality UK components from a network of trusted suppliers which gives us the ability to offer so many bespoke options to you. Along with in-house design, strict quality control and adhering to the ISO 9001-2015 Industry Standard, Corbeau hope you love your product as much as they do.